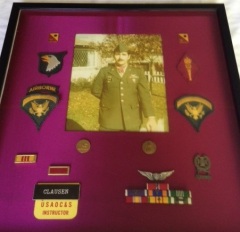 Now I’ve given you all the Letters from Viet Nam from Rog, and I believe he wrote in a humorous style to hide the horror and terror of what he was doing. But there are other things I remember, things he told me. And right now it feels like two of the letters are missing (right before and after he got wounded) because I can remember things he wrote that I can no longer find on paper.

He wrote: Don’t believe what you read in the papers. We don’t fight for patriotism or democracy. We fight to keep alive, to protect our buddies–and we fight to get payback on our buddies who were killed. That’s why we fight.

I can’t remember if he said his machinegun was 50 or 60 caliber. He wrote: The door-gunner machine gun is so powerful I can chop down a tree with it. You can’t imagine what it does to a body.

After Rog died, his stepson Dave told me Rog used to scream in his sleep at night at home. Rog didn’t want to talk about it. But finally he told Dave, “I’m here at the shit plant (the water treatment plant in Palo Alto, CA). and the gooks are coming over wire, over the fence. The gooks are overrunning the plant and I can’t stop them. They’re coming….”

Philip Atlas Clausen is author of The Black Butterfly Woman, a Vietnam era novel about the war. Purchase now at https://goo.gl/MBDMU2 Available as softbound or e-book.

3 thoughts on “What Rog Told Me About Viet Nam”